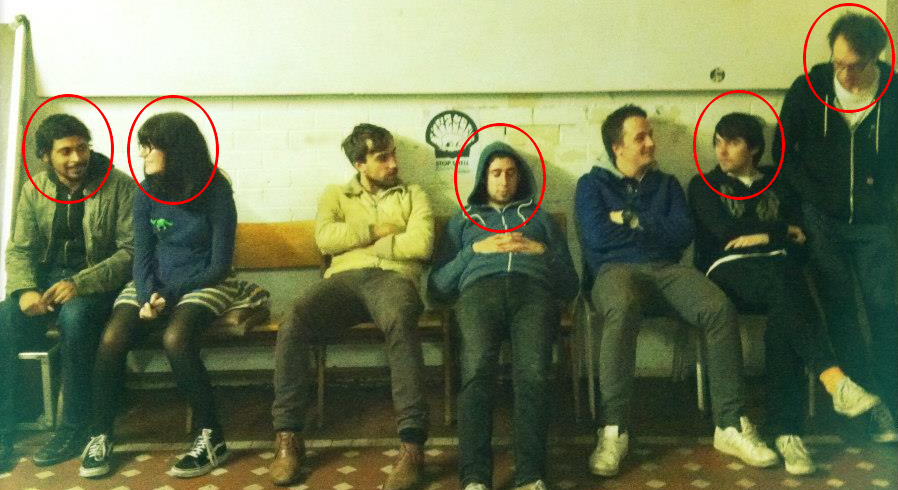 Ace Bushy Striptease are a five-piece girl/boy pop-punk band from Birmingham. They formed in October 2007 and have released five full length albums, the latest of which was a joint release on Odd Box and Discount Horse Records.

We wrote a short bio to go with our last album release. That might be a good place to start if you'd like to know what we think of ourselves...

Ace Bushy Striptease are a five-piece indiepop group from Birmingham. They started five years ago as a distraction from the final year of university, they have grown up slightly over time from a wide-eyed mess into the semi-coherent, rough and tumble cuddlecore behemoth that is shambling round the country currently. The songs are brief, stubbornly avoid repetition and are a bit fancy-pants sloppy-ass pop-punk, all up in your face all of the time.

The band have recorded an album a year since their inception, each acurt blast of enthusiasm barely scraping the twenty minute mark. 'Outside It's Cold Just Like The Inside Of Your Body And', their fifth full length (and first released on vinyl), is nearly half an hour of thrashing, shouting football references and attempts to harmonise. It's not a massive progression but you can tell they've learned their instruments a bit better this time round.

After touring a few times, the band can boast a moderate following and two record labels (London's Odd Box and Durham's Discount Horse) who are jointly releasing the new record and associated detritus.

We've been going a while now so for those interested, we made a brief timeline.

Also our old about page has details of some of the comings and goings that puctuated our first few years.